Mutual Publishing has lost one of its most prolific, talented, hard-working, kindest authors—cookbook writer Muriel Miura. Muriel passed away on November 7, 2020.

Muriel had a sincere passion for food, especially local food, and was eager to share Hawai‘i’s diverse culinary offerings with the world and preserve it for the next generation. She was a consummate professional and always ensured her recipes were clear, easy-to-follow, and accurate. She had a deep understanding and kinship with the home cook and could visualize what their needs were, what they looked for in a cookbook, and what they aspired to. She wanted her cookbooks to be friendly helpers in the kitchen to inspire, encourage, and support home cooks whether they had a leisurely Sunday afternoon to cook or just thirty minutes after arriving home from work with kids in tow.

Muriel may be most recognized for her nationally televised cooking shows from the 1970s, Cook Japanese Hawaiian Style and The New World of Cooking with Muriel. While comfortable with all types of ethnic cuisine, Muriel’s specialty was always Japanese cooking where she added a personal touch of Hawai‘i to her foods. 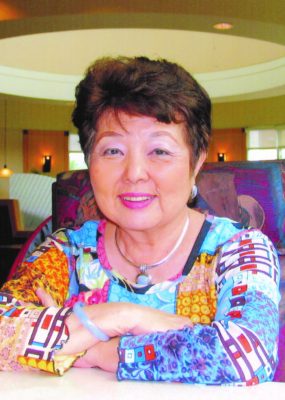 Muriel finished a new cookbook this year, Home Cooking Hawai‘i Style, which will be released next year, and she was wrapping up a dim sum cookbook which will be published posthumously in either 2021 or 2022.

Throughout her culinary career, she judged food contests, taught community cooking classes and high school home economics, wrote articles about cuisine and food, and traveled to the New York World’s Fair as a featured presenter where she won a prestigious award for outstanding demonstration. Muriel also guest-starred on the popular Hari’s Kitchen TV cooking show.

A Honolulu-born kama‘aina, Muriel was involved with a number of community service projects and served on the Board of Directors and Board of Trustees of the Mo‘ili‘ili Community Center.