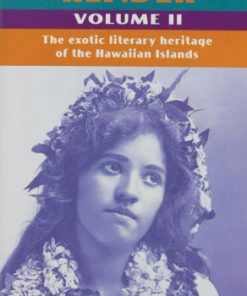 This rich collection, originally printed as The Spell of Hawaii, is a companion volume to A Hawaiian Reader.

The magic islands of Hawaii are endowed with an exotic literary heritage, drawn from legends of ancient Polynesian voyagers and logs of early explorers to stories by some of the great writers of our own time.

This rich collection, orginally printed as The Spell of Hawaii, is a companion volume to A Hawaiian Reader. The twenty-four selections are representative of the best literature of Hawaii, bringing together pieces that have appeared since the earlier volume, as well as many fascinating older ones omitted because of space limitations.

The arrangement of the selections is chronological, according to the date of the event represented. Hence the reader, beginning with James A Michener’s evocation of the volcanic birth of these North Pacific islands, can obtain an exciting review of the unique history of Hawaii. Following legends from the earliest settlers come accounts of the first visit of foreigners to the warring small kingdoms.

Thereafter the selections reflect life during the ruling dynaties as well as Hawaii under the American flag, and offer stories by such masters as Mark Twain, Robert Louis Stevenson, Jack London, Eugene Burdick, and others not so well known. Each piece is preceded by a special introduction.