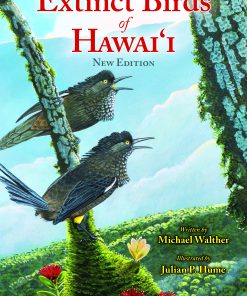 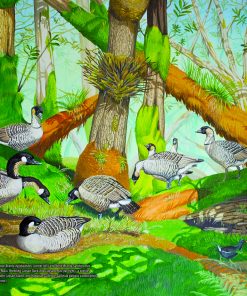 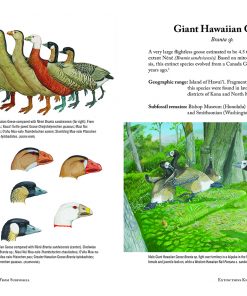 Extinct Birds of Hawaii captures the vanishing world of unique bird species that has slipped away in the Islands mostly due to human frivolity and unconcern.

Extinct Birds of Hawaii captures the vanishing world of unique bird species that has slipped away in the Islands mostly due to human frivolity and unconcern. Richly illustrated, including paintings by Julian P. Hume (many painted specifically for this volume), it enables us to vicariously enjoy avian life unique to Hawai‘i that exists no longer.

Extinct Birds of Hawai‘i also sends a powerful message: Although Hawaii is well-known for its unique scenic beauty and its fascinating native flora, fauna, bird and marine life, it is also called the extinction capital of the world. The Islands’ seventy-seven bird species and sub-species extinctions account for approximately fifteen percent of global bird extinctions during the last 700 years. On some islands over 80 percent of the original land bird species are now extinct. With the many agents of extinction still operating in the Islands’ forests, Hawai‘i’s remaining native land birds are at a high risk of being lost forever.

This new edition includes many new paintings, photographs, charts, and updates on all of the recently extinct species. The extinction of an entire family, the Mohoidae, receives expanded coverage and new artwork.

Many birdwatchers, nature lovers, and eco-tourists are unaware of the tremendous loss of species that has occurred in this remote archipelago. Extinct Birds of Hawai‘i, shows the bird life that has been lost and calls attention to the urgent need for preservation action.

About the Author
Michael Walther became interested in Hawai‘i’s birds when as a young man he first observed the native honeycreepers that had survived in Kaua‘i’s remote Alaka‘i Wilderness area. Later, he helped survey Kaua‘i’s native forest bird populations. In his last year in college, the fate of Hawai‘i’s native birds became the focal point of his research. After graduating in 1995, he moved to Maui where he volunteered for The National Biological Survey working on a research team surveying the wild, wet and windy slopes of Haleakal?. He is the author of four books on native Hawaiian flora and fauna and now operates O‘ahu Nature Tours—“Conservation through education.”

Extinct Birds of Hawaii is a poignant reminder of the loss of bird species worldwide and an inspiring call to protect and preserve those that still live today. Michael Walther has documented and described the impact of our species and shows us how, when, where and why so many bird species declined or vanished. Julian Hume’s illustrations bring the vanished species to life and help us appreciate the scale and importance of this extinction event.  But it does not end there. This book is not an epitaph but a call to action. Inspired by the wonder and beauty of what remains, and with a deeper understanding of our impact, we have the tools to more wisely defend and preserve biodiversity in Hawai’i’s and across the planet.